Wichita SERVPRO Sends A Firefighter to the First Responder Bowl 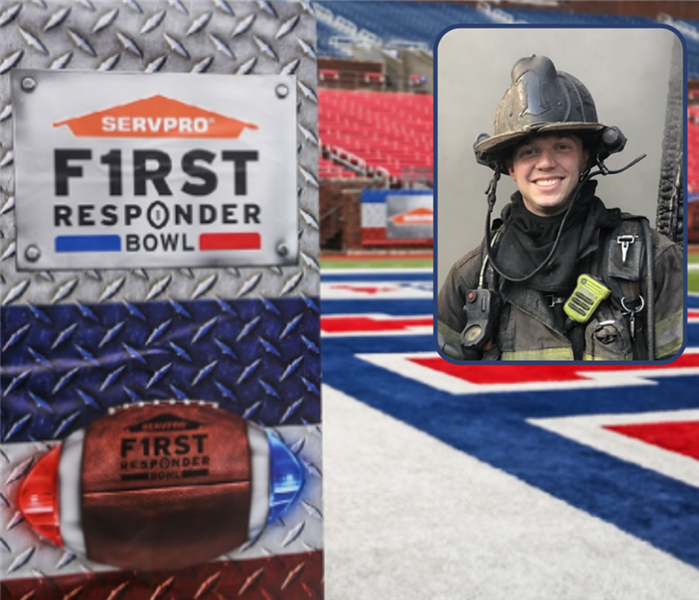 Shawn Hayes of the Wichita Fire Department was nominated by SERVPRO of Northeast Wichita and came in second place for the First Responder Bowl.

“It is with great pleasure we nominate Firefighter Shawn Hayes for the F1rst Responder Bowl. Firefighter Hayes has clearly distinguished himself as an exceptional member of the Wichita fire Department; willing to go above and beyond the standard expected in his duties.? He has constantly, and without fail, demonstrated what it is to truly be a member of Wichita’s Bravest. He serves not only the community but also those he works alongside, with the highest esteem. Firefighter Hayes consistently has a positive and enthusiastic attitude which is contagious and often emulated by his peers. His commitment to bettering himself and representing the WFD in high regard is infectious and makes others also want to improve.

Firefighter Hayes is a critical member of Rescue Company 1 where he has excelled and is highly relied upon and respected by his superiors. One admirable example would be his commitment to the Technical Rescue Team and his desire to improve himself and his fellow crew members on multiple levels. In 2020, the Special Operations Division began the extensive and strenuous task of revamping and improving certain areas and disciplines within the team. One of those areas was a complete overhaul of the dive program under the direction of Battalion Chief Winton. Due to the extremely dangerous nature of “black water diving,” it was necessary to bring the Rescue Company up to speed on the latest techniques and equipment. Firefighter Hayes volunteered for this daunting task without hesitation. In 2021, he began training to be a dive master and quickly obtained his Dive Master certification through PADI (Professional Association of Diving Instructor).? He then quickly began studying to obtain his Dive Instructor Certification through Dive Rescue International for Public Safety. This is an extremely high-intensity program that includes hundreds of hours of pre-work before attending the classes. In addition, he trains new dive team members to obtain their First Responder Dive Certifications per NFPA standards, maintains dive equipment, and helps with training including working on new standard operating procedures all Rescue dive members adhere to. Firefighter Hayes provides continuing education hours to current dive team members and commands dive operations at alarm scenes.

Firefighter Hayes is no stranger to rescues both in water and on land.? Firefighter Hayes was involved in a swift-water rescue where it was reported there was a person inside a submerged vehicle in the middle of the river.? Firefighter Hayes geared up in full swift-water gear with his equipment and proceeded out to the vehicle in frigid water, where he found an occupant in the driver’s seat. He proceeded to remove the occupant from the car then drag and swam the patient to the river bank where emergency crew members were staged.? The patient, who was on leave from the military, was transported to the hospital in critical condition. With the quick actions from Firefighter Hayes, the patient was able to make a full recovery, returning to active duty within days of being submerged in ice-cold water.

Firefighter Hayes’ career is definitely not limited to the water though, his career has involved multiple civilian rescues from fires as well.? Some of his rescues include an intentionally set mobile home fire in which the citizen was suffering a mental health crisis and was attempting suicide.? Upon entry, Firefighter Hayes encountered heavy smoke conditions but managed to find the patient who was coherent but screaming at and fighting the crew.? Firefighter Hayes and his Lieutenant were able to rescue the patient from the structure. The citizen survived despite her injuries.

?Firefighter Hayes’ most intense rescue occurred in 2020.? As a member of Rescue 1, Hayes responded first due to a house fire with a report of people trapped.? On arrival Engine 4 reported heavy fire showing from the home and an aggressive search of the structure was immediately performed.? On entry, Hayes described conditions as “thick dirty smoke, zero visibility with high heat conditions.”? Firefighter Hayes made contact with a victim approximately 10 feet inside the bedroom door.? He reported he had a victim, then began to drag her to the exit as Engine 4 was keeping the fire in check to protect the search crew and victim.? Once the victim was outside the house, Firefighter Hayes and the members of Rescue 1 began life-saving measures until the patient could be transferred by EMS.? Following the transfer of the patient to EMS, he and the members of Rescue 1 reentered the structure to finish their primary search for additional victims. ?The efforts resulted in the patient surviving her injuries.?

In February 2021, Firefighter Hayes was again involved in the rescue of a citizen from a house fire.? An occupant reported there was someone inside but would not give specific information as to where in the structure the victim was located.? Firefighter Hayes and the crew of Rescue 1 assumed search and began working to locate the victim.? The home was an excessive storage house with thick smoke throughout.? Since the fire was located in the front room, Firefighter Hayes along with members of Rescue 1, had to overcome extreme conditions to begin their search of the bedrooms.? Hayes found the victim inside a bedroom and was able to drag her to safety.? Unfortunately, the victim passed away from her injuries despite the all-out effort given by Rescue 1 crew.? Firefighter Hayes was directly involved in the success of a wind-driven fire March 29, 2021, during off-duty hours, when a fire broke out in a duplex near his home. Hayes responded to the alarm and assisted E16 by pulling a 5” supply line and stretching it over 200’ to a hydrant. He utilized his leadership skills by encouraging several civilians to assist him in this task. Firefighter Hayes then assisted the on-scene Battalion Chief in the command vehicle by keeping track of assigned units during the fire.?

Firefighter Hayes is also involved in multiple fire schools including Wichita Hands-on Training and Labette County Fire School. His non-wavering commitment to serving others and selflessness, doing so with integrity and honor, sets him apart. ?Firefighter Hayes’ distinguished and exemplary actions are why he is being nominated for the F1rst Responder Bowl.

Firefighter Hayes came in second place, and we are so proud! SERVPRO Corporate is awarding him a trophy and providing tickets and a hotel room for him to attend the bowl game and enjoy himself. SERVPRO of Northeast Wichita will be partnering with the Wichita Fire Department to put on a celebration to acknowledge this amazing award. Here at SERVPRO being involved with our local First Responders is extremely important to us and we are so excited to have a local Firefighter represent Wichita at the bowl game.