Freezing Temperatures in Wichita KS and Your Pipes 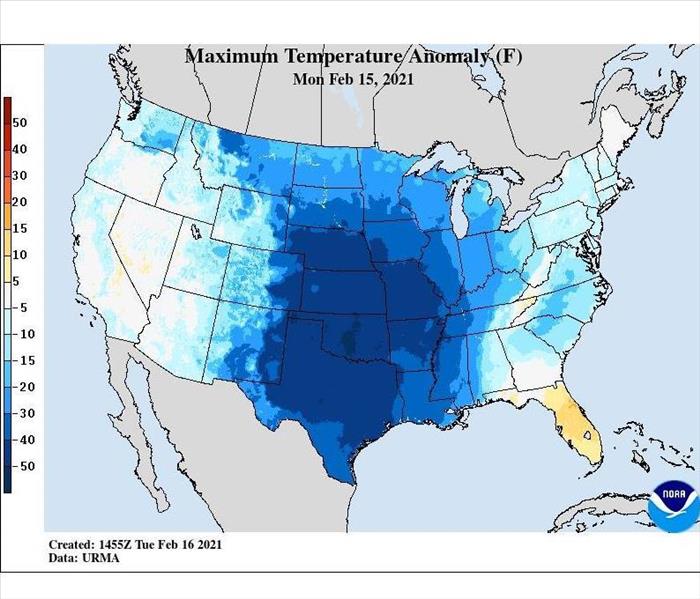 A map of the maximum temperatures in the United States on February 15th, 2021.

In February of 2021, a significant cold outbreak spread throughout the mid United States on February 6th and lasted through February 18th. A cold outbreak of this severity has not affected the region since the 1980s! During this stretch, there were days where the high temperature did not make it out of the single digits. The average temperatures in Wichita during February are around 51 degrees for the high and 24 degrees for the low. In 2021 there were:

Weather like this can affect the pipes in your home if the correct precautions are not taken. The pipes that freeze most frequently according to the Red Cross are pipes that are exposed to severe cold, like outdoor hose bibs, swimming pool supply lines, and water sprinkler lines. Water supply pipes in unheated interior areas like basements and crawl spaces, attics, garages, or kitchen cabinets. As well as pipes that run against exterior walls that have little or no insulation. When pipes that contain water end up freezing the water expands and puts pressure on the pipe causing it to break.

During and after the February cold outbreak SERVPRO of Northeast Wichita saw a huge increase broken pipes caused by freezing.  A lot of times when a pipe breaks you have no idea so when the water thaws and you use your pipe again you now have a water/flood damage situation. That is where we come in.

There are many steps you can take to prevent frozen pipes, such as:

With the crazy and unpredictable weather that we Wichitans have grown accustomed to, storm damage can happen at any time, SERVPRO of Northeast Wichita is always available 24/7/365. Give us a call (316) 684-6700.