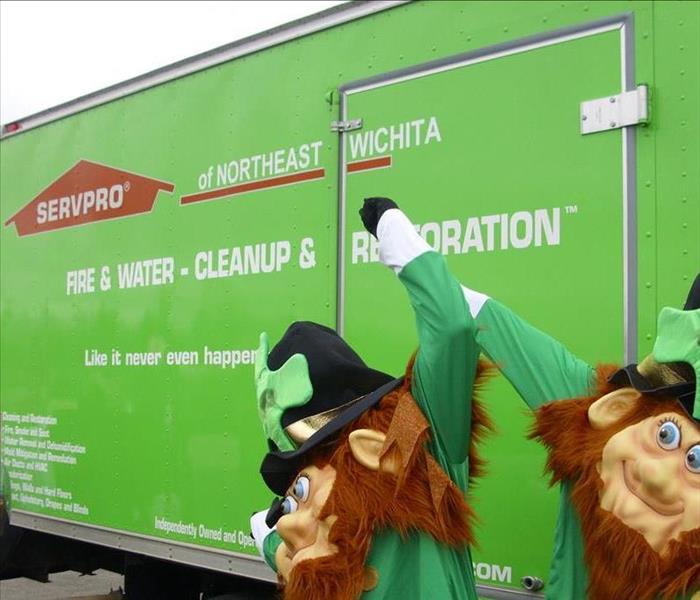 These Leprechaun's won't give you gold but they will give you excellent restoration services which is worth it's weight in gold.

In 1871 Thomas Butler, an Irish priest, wrote a pamphlet encouraging Irish people to move to Kansas. This pamphlet described life on the prairie, the benefits of Kansas’s climate and the well-established Irish communities in Kansas (especially Leavenworth). At the time Britain and by extension Ireland were going through a depression which may have increased the allure of the sunflower state to potential immigrants. Whatever the reason might be Kansas and Wichita are absolutely brimming with Irish folk and St. Patrick’s Day is a bit of a celebration.

Our owner Patrick Butler was born in Ireland and moved to Wichita, KS in 1989. Later on he started Wichita’s first SERVPRO in 2001 and not just because SERVPRO’s famous green, white and orange color scheme was similar to the Irish flag. The Delano St. Patrick’s Day Parade has been going on for 14 years and once again SERVPRO of Northeast Wichita is participating in the parade and bringing the leprechauns. We’ve done it several times and always had a blast seeing Wichita come out a celebrate the St. Patrick’s Day and what is typically the beginning of spring weather.

The parade is this Saturday. March 14, 20202, starting at 12:00 but you may want to get there a bit earlier since most of the time the streets are packed! The parade route is Douglas & McLean to Douglas & Walnut. Come on out enjoy a great day and great atmosphere in Delano. Take a look at last years parade here!